How to launch a surprising incentive program with almost zero cost?

In our opinion, a good incentive program should be an argument for long listing but not for a final decision.

Site selection is not a science. Especially on early (long listing) phase, team members often don't make detailed calculations or financial analysis - they just select promising locations for site visits and for future analysis. The only question how to make your location promising. It's easy: say something interesting.

Maybe you realized: competition for new investments is a competition of incentives. But there is always a better funded location which can provide +20% state grant for the new investment. I say, try to avoid the  "incentive competition" (when interesting = bigger money), instead provide smart and surprising incentives for early stage site selection. The following examples won't make you the winner location, but can put you on the map.

#1: Provide something for free

The classical article of Wired Magazine about the 'economics of free' is interpreted as the fundamental of online economy. In fact, the idea works universally. In the noisy economic development world your messages will be very, very whispering (except if you are the governor of California). If you provide something for free, site selectors will be courious.

OK, you can say, it's not better than to deliver the national treasure for a new factory. And here is a small trick. Provide an industrial plot for free. The plot itself costs some percent of total investment (yes, indeed), but site selectors somehow don't realize this fact (probably because they make the ongoing site selection first and last in their lifetime). Invest your incentive money into an industrial plot and provide it for free, if new investment achieves your strategic goals (in jobs/payed taxes etc). Because it's a new and surprising way for subsidize companies, it promotes much better your location than the same amount as a cash subsidy.

Daimler Inc. seeked a new Eastern European site for manufacturing its B-class Mercedes. One of the competing cities, Kecskemét, Hungary had a new, a little surprising idea: they offered an own, dedicated vice mayor for Daimler. The dedicated vice mayor's job involves, said the management of the city, the support of implementation and operation of the new manufacturing site. The management of the city knew: starting business in a foreign country, in unknown business environment, permetting a new facility in unknown legal processes means relevant risk for the company, because the handover of new facility building cannot be predicted and the market entry of new products is unsure. And also the operation of new manufacturing site can be improved with an 'embedded' local authority.
Everybody talks about the local business friendly environment, the innovation was in this case the face of this promise. And even more, if I were you, I would make a new business card to your almost-dedicated vice mayor at the final phase of negotiations, just like this: 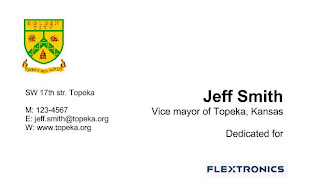 Just imagine the effect, when your man hands over this card to the Flextronics' site selection team...

Many business parks and economic development agencies think about internet marketing just like building a website. What a 20th century approach.

Recently I read a whitepaper about digital presence, it summarizes well what I think about internet marketing.  Many marketers in site selection industry think about online promotion as an optional plus, and the mainstream marketing activities are offline. However, site selectors often collect information from the Web, and a single website is not enough to engage them. Establishing a strong digital presence means: you share information on several platforms about you and your destination, so prospects can find you much easier.

The concept of content marketing or social media marketing is based on the sighting: people don't like advertisments. Don't read it in newspapaers, don't watch it on TV (do you?). And also your pushing sales offers on your website can activate people's "advertisment filters".
Instead, people like valuable, interesting information about topics which solve their problems or provide gains. The following short video is also a good summary of content marketing:

OK, after a general introduction, see how and why should you provide content for your prospects. Content marketing means you should start some (not too many) "information channels" to support site selectors' job. The members of site selection teams are not "site selection experts", they are corporate professionals from  fields like HR, finance, engineering etc. They do their site selection work probably once and last in their lifetime. Support their work, collect and analyze information about your investment destination - and they will appreciate your work, will trust you, when you highlight your location/facility inside your investment destination.

SlideShare. SlideShare.net is a boosting platform for delivering your location-related content to the world. Recycle your older blog content and try to create a ppt slideshow about your destination.

White papers. When you search the term, for example "Doing business in Oklahoma", you will find legal advices only. However, selecting a new site is not just about law. Write comprehensive guides about your destination, and make it downloadable on your websites and other content sharing sites (also on SlideShare).

Google Maps. I like maps because maps can illustrate sites and business environment: transportation infrastructure, locations of leading companies, major cities and labour markets etc. Create Google maps about your destination, share it online and also embed it into your web pages and blog posts.

LinkedIn. LinkedIn is the leading global B2B social media and information sharing platform. Share your blog posts, SlideShare presentations, white papers and maps in target groups and your prospects will find your content, will know you and your site.

Free tips into your inbox